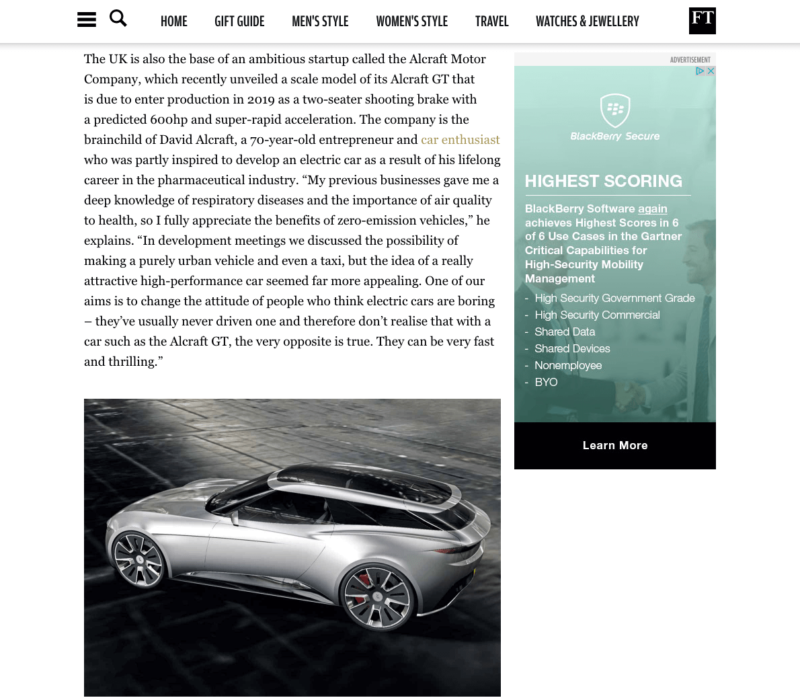 The Alcraft GT has been identified by the world’s leading luxury title, the Financial Times’ supplement How To Spend It, as one of a vanguard of luxury, high-performance electric cars heralding a new world of exciting electric driving.

Saying that the GT and its kin are “in a parallel universe” not only to cars like the Nissan Leaf but also the Tesla Model S – even with its ‘Ludicrous Mode’ – How To Spend It adds that a small number of manufacturers “are creating models that are luxurious, fabulous-looking and blisteringly fast – in short, electric cars are going hyper.”

Written by How To Spend It’s motoring expert Simon de Burton, the piece highlights not just the inherent performance capability of electric vehicles but also the fact that the simplicity of battery-only EVs lends them to a contemporary sense of luxury as hushed, responsible and cool, as well as the lead being taken in this space by new, focused brands and the most agile and forward-thinking large carmakers.

“Automation, commoditisation and car-less millenials are a part of the emerging landscape,” says Alcraft Motor Company founder David Alcraft, “but there will always be a demand for beautifully conceived, visceral and emotionally engaging personal transport.”