Media Give Alcraft Motor and the GT a Fantastic Reception 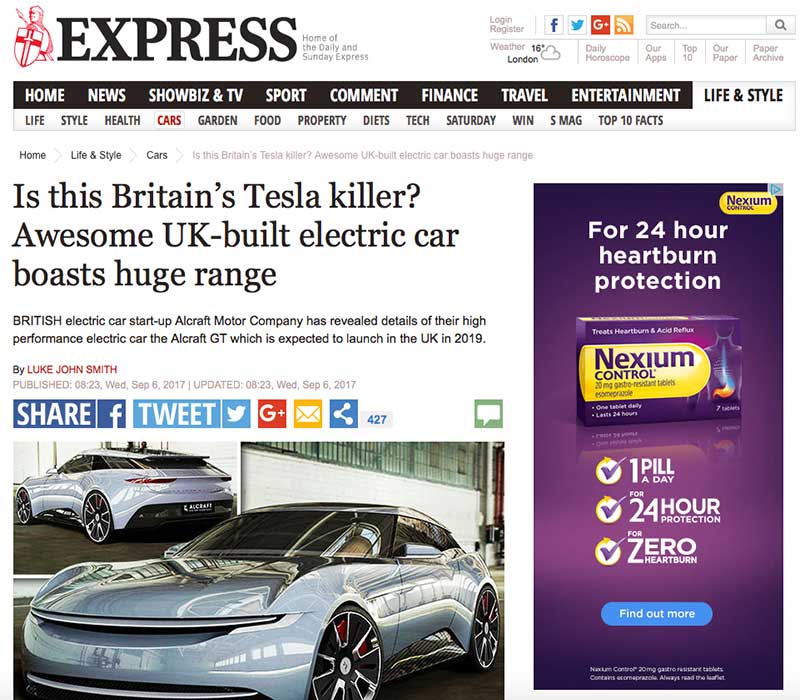 This month’s announcement of Alcraft Motor Company and its first car, the GT, has resulted in huge press coverage in the UK and across the world.

The response has been universally positive, from Europe and the Middle East to Asia and North America.

One of the world’s longest-established titles, Autocar magazine was effusive in its enthusiasm for the GT, saying “What an incredible-looking car…I’m aching to have this thing go into production. The world needs more cars like the Alcraft GT.”

Global automotive media brand Top Gear headed its review of the GT simply with the words “Looks lovely.” Acknowledging that Alcraft Motor is a start-up, it added “…rest assured some strong names are behind this one.”

As well as echoing the strength of the team, influential US magazine Road & Track praised the British design ethos and uniqueness, saying there’s “…no direct competitor in sight as far as the body style goes…”.

Leading online titles CarThrottle and MotorAuthority respectively described the GT as “A gorgeous shooting brake you’ll want in your fantasy garage” and “…attempting to bring sex appeal to the electric car” with “stunning sheet metal.”

The announcement made it into national newspapers as well as motoring media. In the UK, The Sun, whose website has over 25m unique visitors monthly, described Alcraft Motor as “Britain’s Tesla” and the GT as “stunning”. The Express described the car as “Awesome…It looks incredibly striking.”

Company founder David Alcraft says “We were confident in the concept and design of the GT and what we can bring to the electric vehicle market, but we’ve been bowled over by the enthusiasm of the media, automotive industry fraternity and public. It seems that we’ve hit a sweet spot with the GT and how it communicates what we’re trying to do. People want it to happen and we’re determined to bring the car to production as quickly as possible.”